The Art Of Reading Between The Lines

And I have to warn you. There will be talk about women’s issues. If you want to skip the women’s issues, just scroll down until you see grass. You should be safe then.

Today I had my old IUD removed, and a new one fitted. Just for you, I’m going to recount the dialogue between my OB/GYN and myself. What was actually said is written in bold. What we really meant is written in italics.

O: At your age women are usually starting to think about babies and it’s that time in your life when a new IUD shouldn’t really be top priority.
You’re old. You only have a few more baby-making years ahead of you.

Z: Yes, I’m aware of that, but my boyfriend and I are not at the baby-making stage yet.
Thanks. Jerk.

O: Are you sure? We could sell this *holds up the IUD* to someone else and you could go home and make some babies. *laughs*
You’re old. Don’t you get it?

O: Well then. When the new IUD goes in, it can safely stay there for 5 years and would have to be removed in 2015. *looks at my chart* At which time you would be 30. *makes ugly face*
Damn, you’re old. At that point you’ll have one foot in the grave and won’t be able to have babies if they sold them on eBay.

O: Okay then, let’s get to it.
Let the torture begin.

O: I’m going to take out the old one first. You might feel this. *yanks it out*
This is going to feel like I’m ripping something out of your uterus. It will hurt.

Z: *jumps at the pain and tries not to whimper* Uh huh.
Goddamn that hurt!

O: I’m going to grab your cervix with these pliers and dilate it. Did you take any painkillers before coming here today?
This is going to feel a little like someone’s sliding a knife inside of you.

Z: Uh huh. *jumps at the pain and tries not to whimper but fails miserably*
Fuck!! Hurry up, hurry up!

O: I’m going to insert the IUD now. This might hurt a little.
Hehehehe.

Z: Uh huh. *jumps at the pain and tries not to scream, screw the whimpering*
Motherf***er! Are you trying to insert it into my brain??

O: All done. It wasn’t so bad was it?
Just wait until you have to give birth.

Z: No, not bad at all. *wipes away the sweat on her forehead*
Holy shit, get me out of here.

I’m kidding. I love them.

Because of the trip, today is the second to last time I’ll be posting a picture of my grass. Today’s grass is designed, composed and assembled by my sister, the fashion designer. She chose to mimic a real life situation, in which a bear scientist and a beaver scientist find a dinosaur egg twice their size. Very realistic, if you ask me.

She also cut the grass, which seems to be growing at an alarming rate. Every day I wake up to find it bigger and bigger. Last night I cut it, and this morning it had covered the entire kitchen again. Muschu started by cutting a little on the left. Then she cut a little on the right. But then the right side was suddenly shorter than the left, so she cut the left side some more. But then the right side was longer again, so she had to go back there to cut some more. When she started to talk about a mohawk, I stopped her. 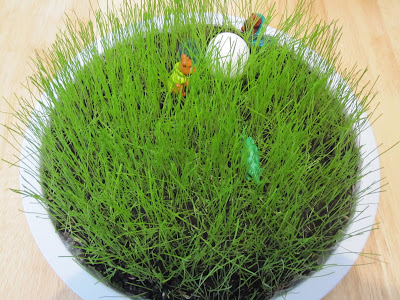 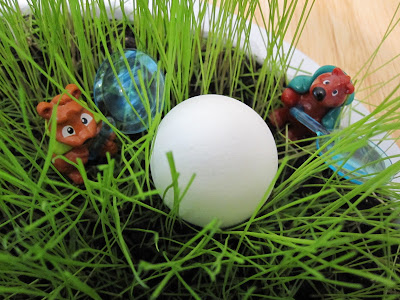 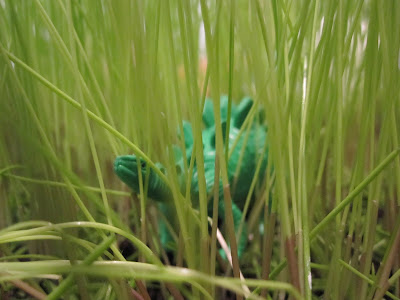 The observant will notice mommy dinosaur sneaking away. Oddly enough, she appears to be very small compared to her egg. I bet her belly looked ridiculous.
*

The Art Of Reading Between The Lines