The other day MikeWJ and I were talking and something I said made him think of this phrase from a well-known song:

I can’t remember what I said, but it must have been pretty profound. I’m deep like that. After Mike went to bed and left me to guard the world, I realized that I have a piano, 15 fingers and the internet, and that by combining these 17 things, I could probably make Mike a little gift. I stole the chords from the internet, sat down at the piano, and recorded about 27 different copies of the song until I finally had a copy that was somewhat presentable.

Because sometimes a broken Hallelujah is all you get. And it's often more interesting than a whole one anyway. *

The Empire Strikes Back

Remember when I told you that M and I are going to become pet owners? I said that we were going to have a fish tank filled with pretty black fish. Sadly, that’s not going to happen. M and I simply couldn’t agree on what to put in it. I wanted a shark, he wanted goldfish. I can only assume he feels some sort of kinship with the little buggers. Why, I don’t know. I’ve been told a goldfish can only remember the last three seconds of its life at any given time, and I’m pretty sure M’s memory is marginally better. Then again, on Mythbusters they were able to train goldfish to swim through colored hoops in order to find food, and I’m positive M couldn’t be trained to do that. Oh well, it doesn’t really matter since we’re not going to do the whole fish tank thing after all. If we did, it would be strictly to grow our own cat food.

Yep, we are now the proud owners of a cat. Or rather, I’m proud. M’s mostly terrified. It seems he thinks they are all innately evil. M’s such a weirdo, how could this cute little thing possibly be evil? Say hello to Darth Vader: 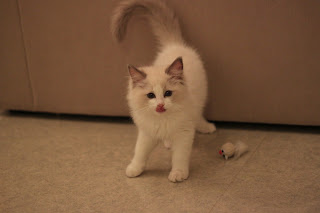 Do you like the name? It was a toss up between Darth Vader and Bubbles. Darth Vader is a Ragdoll, he’s 12 weeks old and likes long walks on the beach and classical music. *

The Empire Strikes Back