I’ve been told you’re never supposed to apologize on the internet. Suffice it to say that after my last post I was so embarrassed by all the cat pictures that I fell into a deep depression, drank all the vodka I could find, moved on to the fine wine, then the not-so-fine wine, polished off the absinthe and the gin, moved on the fruitier liqueurs and finished my binge with a very nice pear cognac. Then I went to the liquor store and really got started.

I woke up three weeks later, disoriented and broke and with a strange sense of déjà vu. Gingerly, I set out to make things right again. I sold the Russian mail order bride, recycled all the empty bottles, threw out the very exotic collection of roadkill that had somehow appeared in my apartment and fed the cats with some old pizza I found under the couch.

Then I opened my laptop and realized I’d missed about a year’s worth of blog posts (how is that even possible when I wasn’t away for more than a couple of weeks?) I closed the laptop, baked a mudcake, ate it with some ice cream and a nice glass of wine, and opened the laptop again. Before the week is over, I will have read all some of the blog posts that I’ve missed. You have my very questionable word on it.

And now for something completely different. In God’s chosen land, the land of over-sized everything, of ridiculous lawsuits, turducken and Arnold Schwarzenegger, in the land where it’s perfectly legal to be Sarah Palin, pizza is now a vegetable. At least if we ask Congress.

This got me thinking about a conversation Mike and I had a couple of days ago. It went a little like this:

Mike: Finland was mentioned on the most recent episode of Parks & Recreation. One of the characters traded all of Finland's boring stuff for lions at a mock UN conference. Funny.

Mike: It's very funny. I think so, anyway. They'll probably cancel it next week. Not Finland. The show. I'm sure Finland won't get cancelled for a long time. But if I hear anything, I'll let you know so you have time to pack.

Mike: No shit. Did you know America's never mentioned in the Book of Revelation? It doesn't even figure into The End of Days. And yet we think we're so important. Some of us do, anyway. Not me.

Mike, my other American readers, you better start packing cause any country that declares pizza a vegetable is about one bad plot twist away from being cancelled. On the plus side, I hear Canadians are really nice to foreigners. 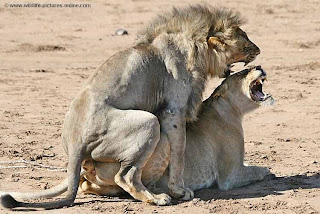 Lions, way more interesting than all of Finland's boring stuff.
*