...nothing to see here 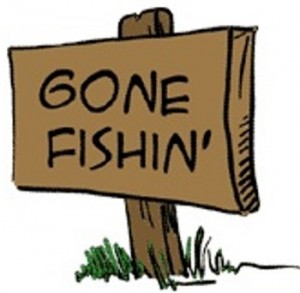 Your horses are lovely, and your hot springs are pure magic. Or so I’ve heard. But your timing sucks. See, a couple of weeks ago M and I decided we’d had enough of the chilly Finnish spring, and bought two plane tickets to Greece. Are you listening? Greece! We’re leaving next Tuesday and will be spending one long, glorious week in Athens where it’s warm, summery and sunny. I know these concepts are foreign to you, but think of summer as that time in the year when the ice is less cold, and then you multiply it by a hundred and add a singing monkey or two. See, in Athens there’s the Acropolis, and the, well, the Acropolis, and… it’s like the birthplace of modern civilization or something. Fine, I’m gonna do some research, okay? But it’s like totally great, and we’re going there.

At least that was the plan. Enter you, Iceland. It seems like you always have some unplugged hole, spewing crap at the world. First it was Björk, then it was Eyjafjallajökull, and now it’s Grimsvötn. 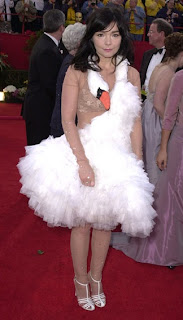 Björk, dressed in her favorite pet.
Iceland, if you’re reading this, I always get a terrible headache flying through volcanic ash, so I would be very happy if you could hold off any further eruptions until after we get back.

Today my gorgeous little kitten is feeling less Darth Vader and more Darth Mauled. After today's surgery he is two testicles less of a man, and has had a micro chip implanted into his neck for easy programming. He's sleeping it off right now and I have to say, I'm very proud of my Darth Vader. The veterinarian said the fur is strong with this one, and I agree with her. But I do feel a little guilty, and I find it very sad that my little Darth Vader will never have the chance to say, "insert generic cat name here, I am your father."

Before I took Darth Vader to the clinic, I wanted to make sure he knew what was coming, but I don't speak cat and Darth Vader didn’t seem to understand French. Then I heard a voice. It said, "Use the force, Ziva." And I did. Steeling myself for the most important game of charades I've ever played, I used my Jedi mime tricks to tell Darth Vader about his impending castration.

Arms flailing, hair flying and legs kicking, I told Darth Vader what to expect; that his man bits might not be quite as sizeable after the little operation, and he looked at me with despair in his little kitty eyes. But I said, "Size matters not, ... Look at me. Judge me by size, do you?" And he said, "You're huge." And I said, "Yeah, I keep forgetting you’re a cat and you’re tiny compared to me."

Then we had a bit of an awkward pause.

But I soon gathered my thoughts again, and said, "Look, Darth No-Balls, errr, Darth Vader, just because you have the snip snip.." But he interrupted me, quite rudely, and said, "Snip snip?! This is no snip snip! This is more like cut cut snip snip dig around rip it out and sew it shut again. And all the other cats will go 'Lost his balls Darth Vader has. How embarrassing…' "

And the only words of comfort I could offer him were, "Don't worry; you’ll still have your lightsaber." 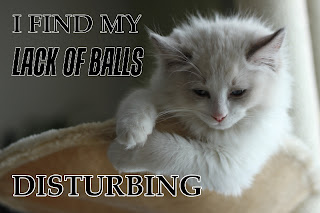 Author's note: I apologize deeply to anyone who hasn't seen the Star Wars movies, and urge you to do so before you declare me mentally insane.

Author's note, vol. 2: I also apologize deeply for creating my first LOL cat picture. You may declare me mentally insane. *

Today I am proud to be a Finn.

Because Finland won the Ice Hockey World Championships in an epic game against our arch nemesis, Sweden. And we didn’t just win, oh no. We crushed them. Killed them. Sucked every last ounce of life out of those sad little boys playing with their sticks and their pucks. We slaughtered them with all the subtlety of a train wreck. When we were done with Sweden, they were lying on the ice, sucking their thumbs and crying for their mama.

I realize of course that most of my readers here don’t even know that the Ice Hockey World Championships were being held, much less that they were being held in Slovakia. In fact, I’m sure many of you don’t even know, or care, where Slovakia is. And if it weren’t for the fact that Finland just delivered a Chuck Norris-like roundhouse kick to Sweden’s over-sized head in Bratislava, I wouldn’t care about Slovakia either. But because Finland burned Sweden to the ground, collected the ashes and burned them again, I have developed a new-found fondness for Bratislava, this most beautiful of all European cities.

Aaaaand, that’s really all I have to say today. I love Finland. I love Slovakia. And in case you forgot already, Sweden sucks monster moose cocks. Don’t ever forget it. *

Bet You Didn't See This Coming

Last weekend I showed my pussy to hundreds of people.

I know what you’re thinking; no way is her pussy pretty enough to be showed to that many people.

But you would be wrong. He definitely is. And the judge agreed.

When Darth Vader heard he was going to a cat show, this is how he looked: 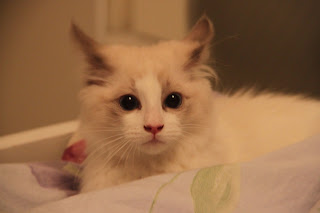 Then he bent down and licked his penis. I tired to explain to him that it wasn’t my choice, that I’d simply promised the breeder I would take him to a show to see how he’d do, and that he’d better just look really crabby and he’d probably never had to do it again.

This is him looking crabby. In his litter box. 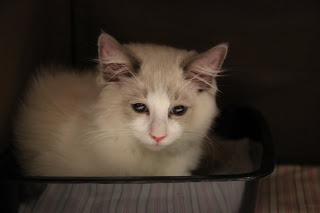 And this is him being manhandled by the judge. 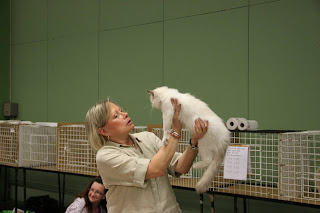 As it turns out, people who take their cats to cat shows are very interesting. I saw one woman pushing her two cats in a stroller. I saw a man walking around carrying his huge Maine Coon as if it were a baby. And I saw a woman cry with joy when her ugly naked rat won something.

M and I spent most of the day feeling sorry for Darth Vader in his little cage, and generally not grooming him enough, if the other contestants were to believe. I don’t even brush my hair as much as these people brushed their cats’ coats. Actually, I don’t really brush my hair at all, but that’s beside the point. These people were brushing, spraying, rubbing, powdering, clipping, plucking and wiping their cats. Not necessarily in that order. I actually did bring a brush, but Darth Vader just wanted to play with it.

But M and I did do one thing to prepare the poor kitty for his show. We washed him. Heh heh. 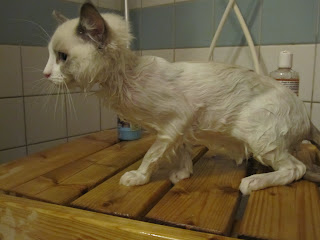 Tell me that isn’t the funniest thing ever. He looks like one of those long-haired rats people are so fond of, what are they called? I can never remember. Oh! Chihuahuas! He looks like a Chihuahua. Try to spell that five times fast.

And this is what we won. I'm going to pin it to the wall so that it's the first thing people see when they come through the front door. 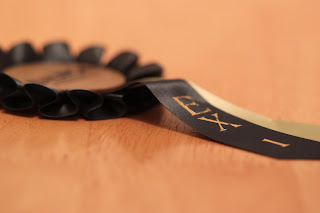 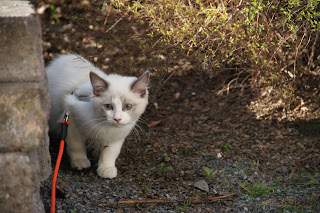 Because more pictures of cats is exactly what the internet needs. *

Bet You Didn't See This Coming

Ever since I first heard it, I’ve loved the song Greensleeves. I love the simple and beautiful melody, and the lyrics of unanswered love. It’s widely believed that this English folksong was composed by Henry VIII for the one girl who simply wouldn’t be his mistress, Anne Boleyn. That is, before he became obsessed with divorcing his queen consort, marrying Anne and subsequently having her head chopped off, of course. However, it seems unlikely that he had the time to compose songs and write lyrics, what with all the wiving, seducing and beheading he was doing. In fact, it’s more likely that it was written after his death. Some say Lady Green Sleeves was a prostitute, others say she was immortal. Whoever she was, she clearly had a thing for green dresses, and inspired someone to write a beautiful piece of music.

In more recent times the song has been covered by many talented artists, and some of you might even know it as a Christmas carol. However, the most notable version is perhaps Leonard Cohen’s Leaving Green Sleeves. His lyrics are harsher, colder, and just as lovely. If you have the time, it’s worth a listen.

Now, you won’t hear me sing the song, but I will play it for you.

My Weekend in Pictures

This weekend we celebrated vappu. Read all about this strange Finnish custom here. 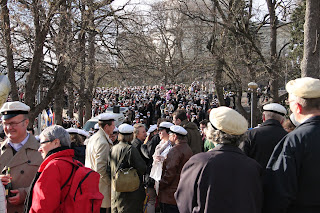 Lots of people, and just as many silly white hats. 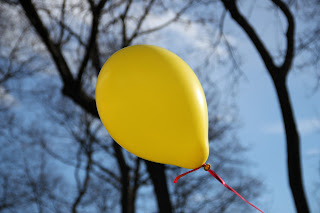 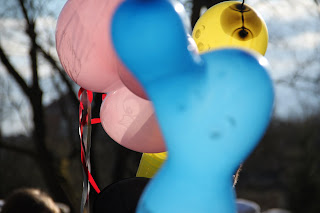 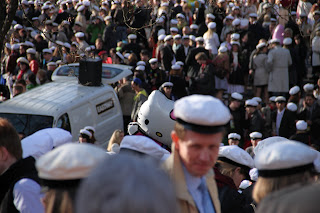 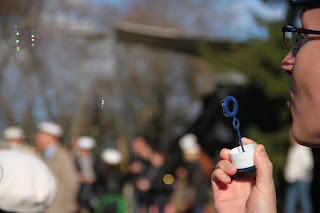 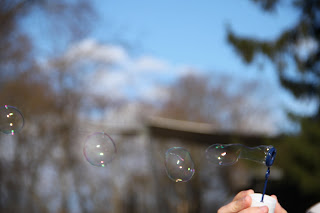 Now that I think about it, vappu is just like a huge birthday party for a kid. 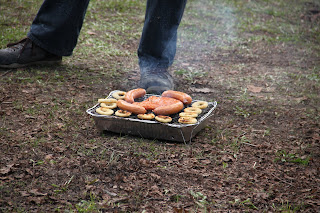 The next day was picnic day, also known as start-your-own-forest-fire day. 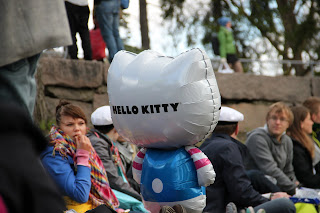 Even Hello Kitty defied the hangover and made another appearance. 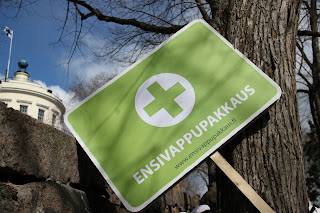 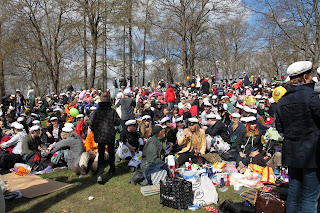 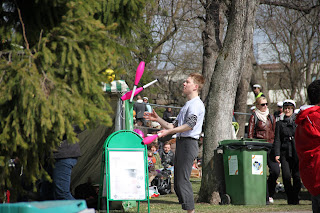 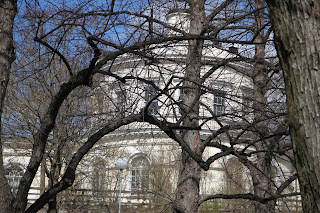 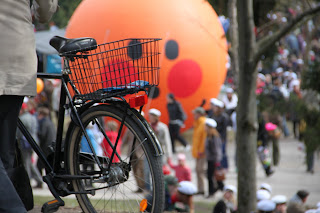 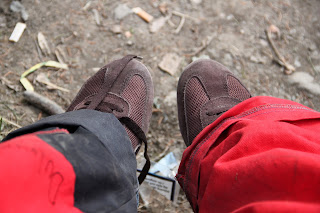 Yep, I did it. I published a picture of myself. My feet look like I felt. 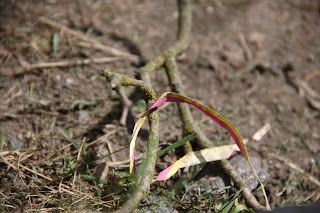 Even the stick got a little tired of partying.
*

My Weekend in Pictures