M: You’re the cutest girlfriend ever.

Z: But Natalie Portman and Scarlett Johansson are also somebody’s girlfriends, and they are definitely cuter than I am.

M: Well I heart you too.

Z: I less than three you.

M: I less than three you more.

Z: I less than three you most.

M: But I less than three you even more.

Z: You can’t do that; I already said I love you most.

M: Well in that case I love you almost, but not quite as much as you do. I love you the same amount, minus epsilon*.

Toasted or not toasted.

These were just a few of the incredibly difficult questions running though my mind as I prepared to try something I had only ever heard of. This particular delicacy was something every American in every book, movie or TV-show spoke of with reverence. The staple of any American upbringing.

The peanut butter and jelly sandwich.

For the longest time I had wanted to try the infamous PB&J sandwich, because in my country a good breakfast doesn’t involve jelly or worthless white bread, it involves porridge, rye bread or a boiled egg. But finally, after years of surviving on nothing but rye bread, I finally realized I was a grown person and I could indeed put jelly on my sandwich if I felt like it. The mere thought made me feel wonderfully rebellious.

At the America shelf in the grocery store I found the peanut butter. Creamy and chunky were my only two choices, but to a peanut butter virgin that seemed like one too many. Finally I settled on the creamy, with the thought that it was probably better for my peanut allergy. Turns out it wasn’t. Who would have thought.

I then picked up some jam, because honestly, only Americans eat "jelly". It sounds like a children’s dessert. Speaking of which, I once tried making Jell-O in an attempt to identify with Americans and see what all the fuss was about, but I found it utterly disappointing. It was pink. And that’s just about the only good thing I have to say about it. It had a consistency that couldn’t be chewed and just sort of disappeared in your mouth when you tried to catch it with your tongue. It didn’t taste of anything at all, except maybe some preservatives. It was a dull and tasteless dessert.

Next, I grabbed some worthless white bread and went home to educate myself about the American way. And for your viewing pleasure, I documented every single step of the way. 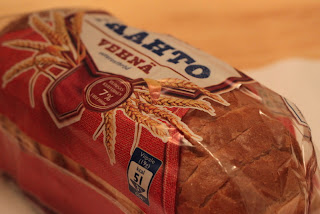 Two slices, because apparently Americans don’t do open-faced sandwiches. Which makes sense, why eat only one slice when you could get twice as many carbs in one sitting? 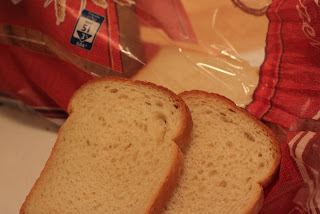 I popped the bread in the toaster. I’m not sure if you’re supposed to do this or not, but I find non-toasted white bread gross. 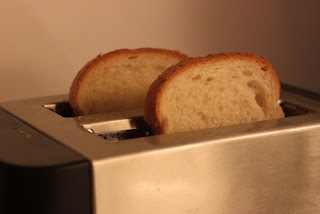 Perfect toast. And probably the most boring picture I’ve ever taken. 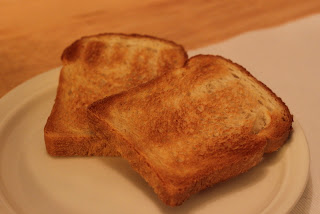 Next came the peanut butter. 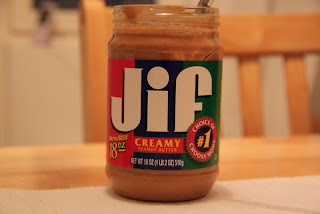 I spread a liberal amount on one of the pieces, because that’s what Wikipedia told me to do. 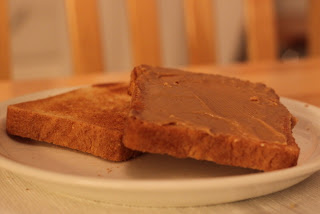 Then I grabbed the jam. So interesting! 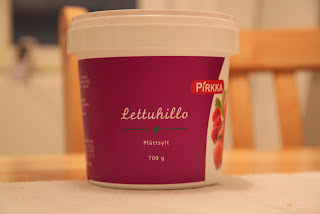 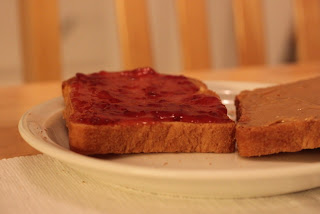 I put the two pieces together and cut the thing diagonally in half like Americans are so fond of doing. Weirdos. 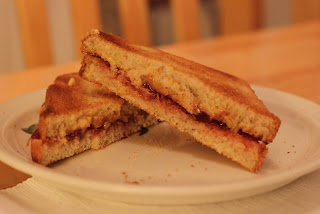 And then, I finally took a bite out of it. 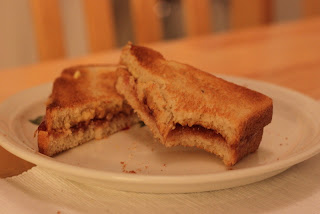 I didn’t exactly hear the Hallelujah chorus, or die of pleasure, but I took another bite to make sure. 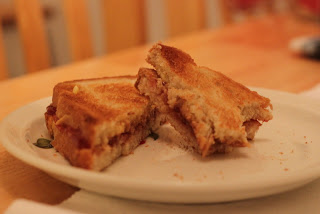 Nope, it was still just plain boring. The peanut butter had a weird dry taste to it, and the jam made it taste like dessert instead of breakfast. Wikipedia says that the average American will have eaten 1,500 PB&J sandwiches before graduating from high school. I have a feeling I’d make a pretty lousy American.

But at least spring is finally here, so I can end this post on a good note. And I even have proof of spring’s arrival.

See the snow depth? It’s less than 45 cm! When there’s only one and a half feet of snow left on the ground you know summer is just around the corner.

And last, a couple of pictures of the cat. For Mike, because he just can’t get enough of the little furball. 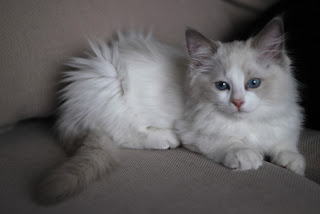 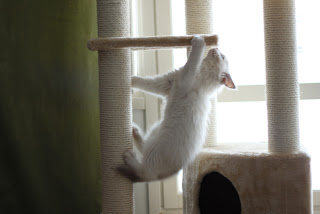