Why Sleep When You Could Be Putting Out Fires?

Any alarm going off near my car is a bad thing. See, I have a weird feeling that my car is one day going end up like this; 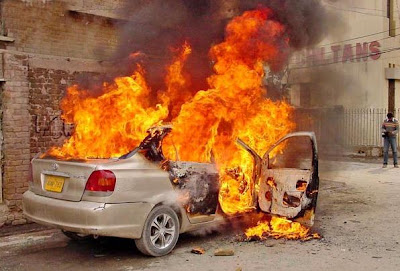 Except my car is blue. And it’s not a Toytoa. Who buys a Toyota anyway? Don’t ask me how I know my car will go up in a ball of flames, just call me psychic. Every time I drive my car I continuously check for little warning signs: red warning lights on the dash, weird noises from the engine, loss of power, huge flames under the hood… You know, that sort of thing.

We got dressed and took the stairs down to the garage, because in case of a fire you’re never supposed to take the elevator. Don’t ride and burn, kids. On the ground level we saw a huge fire truck outside the building, and intelligent and self-preserving as we are, we continued down to the garage where we were met with the greatest anti-climax ever.

No fire. No smoke. Not even a little. Two fire fighters stood outside the garage door, trying to get in and turn off the alarm. We let them in, they told us we did the right thing to come check on the alarm, they turned off the alarm, we bonded over hockey, and they left again. M and I felt like real heroes. The fire fighter said that if you check on alarms as quickly as we did, we would have probably had time to prevent a bigger fire by extinguishing whatever car was on fire.

I didn’t feel like telling him that if a car had actually been on fire, I would have probably run screaming in the other direction. I’m brave like that. See that picture of the burning car up there? See the guy standing right next to the car on fire? Yeah, that’s not me.

I’m off to the gym again. And speaking of the gym… Guys, if I can tell if you’re a righty or a lefty just by looking at your shorts, you are wearing shorts a few sizes too small. I’m just saying. *

Why Sleep When You Could Be Putting Out Fires?