In Finnish, there is a unit of distance called poronkusema, which roughly translates into “a reindeer’s pee”. It’s as far as a reindeer can walk in any given direction without having to urinate – about 4.5 miles, depending on the reindeer. Most of the time a poronkusema is more or less a straight line, but sometimes the reindeer will get lost and it’s a big squiggly S-shape, or if the reindeer has to go really badly, it might be tiny little cross-legged circles.


Now, in the interest of serving you up some facts that are actually useful, let me tell you a little bit about cheese, that wonderful, wonderful substance that Nicky and Mike love so dearly.

This here is a photo I lovingly stole borrowed from Nicky and Mike’s cheesy blog, and for some inexplicable reason, I’m going to give you some entirely fictional facts about these smelly cheeses, in no particular order. 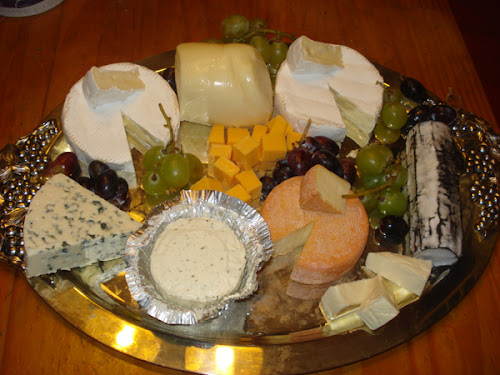 First, there is the wonderful Brie. Hopefully from France, it’s a lovely Brie de Meaux, made with the milk of a cow named Rosa, who lovingly gave birth to a calf and raised him while the electronic pumps pulled every last bit of milk from her udders. The cheese has a very faint aroma that even a cheese-hating Finn can adore. It tastes of mould and spring, and goes very well with a delicate white wine.

The Camembert is very similar to the Brie, but for some inexplicable reason they still have to have different names because some cheese snob in France says so. Nevertheless, the Camembert has a little less fat, and is therefore an excellent diet cheese. But only if you don’t eat it.

Next, there is the cubed Cheddar Cheese. The bane of my existence. Found in everything, the Cheddar Cheese has a sharper taste than the friendly Camembert, and resembles old Lego bricks in appearance. This aged cheese tastes slightly earthy, with an undertone of older gentleman, heavy on the dandruff. Food colouring has been added to give it its yellow tint, and we can only be happy it didn’t come out of a can.

Then there’s the ash-coated Chèvre, a rather soft goat’s milk cheese. Slightly salty, but mild in flavour. A Chèvre is something almost anyone can enjoy. Make sure you get the kind with food grade activated charcoal ash, though, and not the kind with human remains ash. It’s tastier, and you won’t feel bad for eating Uncle Willy.

The Mozzarella looks faintly plastic on this lovely platter, and I can only assume it’s fake. I will not tolerate such cheating and refuse to speak another word of it. Hell, it’s so soft it won’t even do as a murder weapon.

The silly looking round cheese with an orange rind is an Oka, and this one, will in fact do quite nicely as a murder weapon. Just ask Uncle Willy. It goes well with a late harvest Gewürztraminer, or if you’re having problems pronouncing that, any vodka will do, as long as it’s Finlandia. It’s semi-hard (much like Uncle Willy), and while I’ve never tasted it, I can only assume it tastes like cheese, maybe with a faint aftertaste of lost dignity.

The monster in the aluminium package is illegally produced bathtub cheese. It was probably made in Nicky’s and Jepeto’s own bathtub, and has a very pungent smell, due to Jepeto’s frequent cheese baths. This of course has led to a rather nasty yeast infection, causing Jepeto to start producing his very own cheese as well, (thankfully not seen on the cheese platter). It’s best to just stay away from this cheese, for all the reasons mentioned above and many, many more.

We’re almost at the end now, and since the three little white cheese wedges at the edge of the platter are infested with Listeria, I’ll skip those and move on to the last one.

And last, we have the Blue Cheese. The king of horror, this cheese contains more Penicillin than a hospital, and has about the same death rate. It goes well with a strong wine, even better with a gun to put yourself out of your misery. It smells of dirty socks and dead mice, left to rot for exactly 6 days in a humid and warm place. The green or blue colours resemble varicose veins on a beauty queen, and are designed to scare people away. Sadly, many people suffer from an incurable disease called idiocy, and will eat the Blue Cheese anyway. The smell stays with the body long after death.

This post is part of Nicky and Mike’s 30 Minus 2 Days of Writing challenge. Today’s prompt is Fact or fiction. Go check out We Work For Cheese for a list of the other participants. *

Labels: 30 Minus 2 Days of Writing, I may have cheated a little but don't tell Nicky, the most random post ever