Thirty Days of Photographs: When I Was Young

When I was young, my grandfather was still alive.

My grandfather was a beautiful man. I saw pictures of him as a young man when he had thick black hair, and a smile that could charm the pants off any woman. He always had a mischievous look in his eyes, always seemed ready to laugh. By the time I knew him his hair was turning gray, but the twinkle in his eyes was just as bright. He married the love of his life at a very young age, and did hard labor all his life. He was a hard worker, and a very strict parent to my mother and her brother.

He was not as strict with us, though. In fact, it seemed like he devoted his entire life to making his grandchildren happy. He was a heavy smoker for over 30 years, and to this day I associate the smell of cigarette smoke with a safe place, and with nights spent sleeping in a cot next to grandpa's bed. When I was little he used to do jigsaw puzzles with me, he taught me how to play cards, and made me believe that I really won all those times we played. He helped me cut out paper dolls and make dresses for them, and he showed me how to play Tetris on the Nintendo and beat the high score every single time. In the summers he took us to the house at the lake and watched over us as we learned how to swim. He took us out in the little boat, all the way across to the other shore, where he bought us doughnuts.

He showed me how to build a little boat out of bark and to put resin from the tree on the end of it to break the surface tension and propel the bark boat forward. He showed me how to build animals from pine cones by giving them stick legs, and how to loosen the bark from a branch of goat willow and make a whistle out of it. And every year he made a ginger bread house with us for Christmas. This tradition we kept going even after he got sick, with me and my sister making the ginger bread house while grandpa and Anton watched and offered smart-ass comments. On the wall by his bed he hung a huge picture of me as a 5-year old, dressed as a pirate, and when I was little and sleeping over he used to run his finger slowly over my nose, lulling me to sleep.

When he was diagnosed with cancer I spent all my spare time with him, either at the hospital, or at home if he was having a good week. I don't remember doing any studying that year at all. I barely remember the entire year, in fact. From the moment I got the call from mom, saying that he was sick, to a year later when I got the call from mom, saying he wouldn't live through the night, it's all just a big blur. But we did share many laughs, even during that difficult year. I stayed with him that night after mom called, and in the morning I held his hand as he passed away.

I think about him a lot, and I cherish the memories I have of him. For this picture I went out and got some pine cones and gave them stick legs. They're cows, I decided, but M thought they looked more like sheep, and he's right. So they're sheep. The one on the left is Rosa, that's Billy in the middle, and little Eugenia on the right. 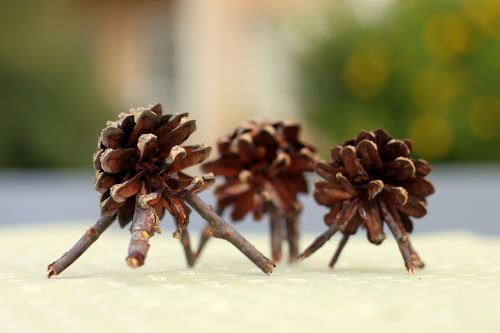 Thirty Days of Photographs: When I Was Young