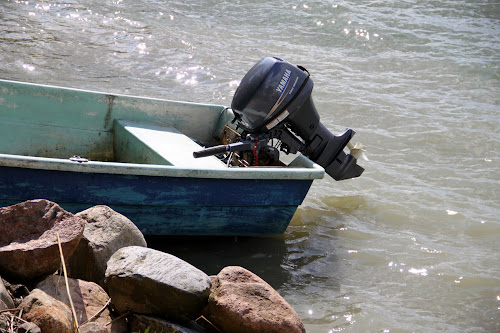 When I was eleven years old I had already spent many summers by the sea, and had learned all the important things like digging for worms and catching my own fish, and doing the puppy dog eyes at dad to make him clean it for me. And next, I wanted to learn how to drive a boat. My dad had a fast motorboat that I was dying to drive, but while I was pointing at the motorboat, my dad simply shook his head and pointed to this old, blue, rowboat, owned by my mother before me and her father before her. There was an old outboard motor attached to the appropriate end, but that was about it. I looked at it and shook my head. I wanted to learn how to drive the big boat. But dad wouldn’t give in, and eventually I just hopped into the rowboat. Aaand hopped out. The holes needed fixing first.

When the boat was sufficiently waterproof, I jumped in again and listened intently to everything dad told me about the outboard motor. Steer left, boat will go right, steer right, boat will go left. Simple enough. It took me about 72 tries to start the motor, though. But eventually I did learn to drive the thing, and I drove it everywhere, at staggering speeds capable of overtaking any wet cat out for a swim.

My mom and dad figured I was old enough to take care of my younger sister out at sea, and so our adventures begun. I’d drive, and she’d look out for underwater rocks, never shouting out in time. We drove from island to island, in to town for ice cream and back again. More often than not we’d run out of gas and have to row the boat several miles back. And if we didn’t run out of gas, someone had mysteriously taken our sparkplug, or forgotten to open the tank vent, or gotten rid of one of our oars. We were a menace out at sea, and if dad had known how and where I drove that boat, I’m not sure he would have let me do it.

I grew to really love that little old boat and the crappy motor. I promised myself I’d paint it some day, but now my brother has taken over ownership of the boat, and it’s still not painted. Dad did buy him a new motor, though, which you can see in the picture. The old held together only with love and duct tape and had to go when the propeller blades started to fall off.

I’m amazed that boat still floats, and something tells me it’ll still be floating long after I’m dead. *