Yesterday I finally decided that I had watched my ass grow big enough and I needed to do something drastic about the state of my behind. Naturally, I first looked into liposuction, but it turns out it’s very expensive. And since I don’t have thousands of moneys just lying around in piles, liposuction clearly wasn’t the way to go. I then looked into those little fish that eat your flesh when you sit a bath tub full of them. Apparently they only eat dead skin and my ass is very much alive. In fact, I think it has a life of its own and is growing without my prior consent. Anyway, the little flesh-eating fish wasn’t a very good idea to begin with; I really don’t like sharing my bath tub with representatives of other species.

I looked into a few alternative ways of losing ass weight, but eating less just seemed boring, and the pills didn’t seem very reliable, and the whole octopus thing just looked scary, not to mention complicated. Eventually I just had to take the bull by the horns. I resigned myself to at least one hour a week of ruthless exercise. I chose Zumba as my means of torture, mostly because it starts with a z and matches my name. How cool is that? Plus? I sort of figured that dancing for an hour couldn’t possibly be that hard.

Of course I wanted to have someone with me, so I asked Zelma, but apparently exercise is “poisonous”, “bad for the soul” and “a ridiculous way for the upper class to get off their fat ass and look good while the rest of the world has to work for our money and don’t have time to exercise in any other way than to do manual labor, therefore making exercise evil incarnate”, whatever that means. In short, she wasn’t coming.

I arrived at the Zumba class sweaty and exhausted from pedalling my bike downhill, and looked around to see if anyone noticed I was dying of a heart attack before the class even started. And that’s when I saw Therese, a very dear childhood friend whom I haven’t talked to in years. It was great seeing a familiar face, and even more great when I realized we had much the same attitude towards exercise. Albeit, Therese could probably pedal her bike downhill without going into cardiac arrest. 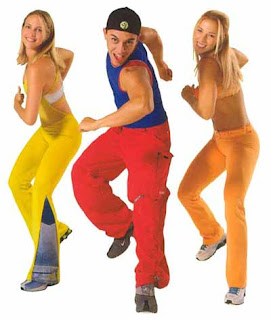 Let’s Zumba! N.B. not Ziva in the picture.
Together we sought out a place in the very back of the class, made sure we knew where our exits were and hoped that 60 minutes would go by fast and that we’d be able to fit into a size much smaller pants by the end of class. A beautiful Latino girl walked into the room and we knew we were doomed. “Let’s start with a light warm-up” she said. 15 minutes later I was as close to death as I’ve ever been. Even counting that time when I accidentally drove right in front of a big rig and made it swerve to miss me.

If I had known that “light warm-up” is actually synonymous with “sweating your intestines out through your skin” I’m not sure I would have signed up for the class. But I did, and surprisingly I liked it. It was all “jump, hop, turn, step, jump, jump, turn again, turn the other way, no the other other you silly pig, jump, step, step, hop, turn” for 60 minutes. Therese and I were more often facing the wrong way than the right way and we probably looked like a couple of monkeys with a itchy rash, but at the end of the class we agreed to think about meeting again next week for the class.

I’ll definitely think about it.