A few weeks ago my friend Zelma and I set out on a quest. A quest to find the holiest of all things culinary – the crayfish. Normally, a crayfish can be found in a river or a lake, and since there are 187,888 lakes in Finland, it shouldn’t be too difficult to hunt one down. However, Zelma and I don’t kill animals for food. If we’re to actually take a living being and put it into boiling water, it will at least have to be for a good reason, like fun, or a good practical joke. Therefore, we went to the supermarket and got the ready-dead frozen kind. They needed a good defrosting, so we left them in the sink and went out for some pre-dinner adventure. We went to the farmers’ fair.

We petted a pig. We looked at a cow. We ran like Satan himself was after us when the heavens opened and an epic thunderstorm hit the fair. Zelma and I ran for our lives. We were too scared to use our umbrellas because we’ve been told never to hold a metal stick in a thunderstorm. We’re smart like that. We were running and screaming and soaked through by the rain and suddenly realized that we were in desperate need of coffee. And it so happens that the coffee shop was way closer than Zelma’s car – what a coincidence!

We ran inside just as lightning struck something not entirely in our imminent vicinity, and pretended that the coffee shop was our destination the entire time. We looked like a couple of drowned, very humanoid, cats. Zelma had a cup of coffee, I had a cup of hot chocolate, and by the time we were done the thunderstorm had passed and we were safe to walk all the way to our car without having to hold metal sticks. I held one anyway, just to show that I wasn’t scared of a little lightning.

We got back to our crayfish just in time to verify that they were still dead, which they were. There’s nothing as annoying as zombie crayfish. We grabbed a crayfish in one hand, a knife in the other and let the games begin. This is how you eat a crayfish, crawfish, crawdad or any other identical crustacean with an identity crisis: First, off with the claws, and suck the juices out of them. Then the claws need to be bent open to get to the tiny piece of meat inside them. Next, the shell, head and inner organs have to be separated from the body. A little suck of the grey ribs is often just the right thing before you move on to the tail. The shell needs to come off the tail, the poop chute needs to be removed, and then you’re sitting there with the only real piece of meat on the entire creature. A tiny little piece of tail that tastes salty and fishy. Yum! And totally worth the effort of dissecting an entire crayfish just to get to a piece of meat the size of something way too small to be dinner. 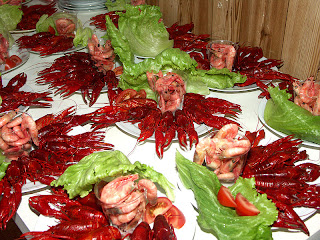 Not dinner.
Zelma and I had about 10 crayfish each, after which we were too exhausted and hungry to keep eating. We went to a barn dance instead. My inner redneck rejoiced. *