I’m so happy we already established I can say penis on this blog, because boy do I need to say it now. See the thing is, my lovely sister Muschu is a bit of a celebrity. Well, not exactly a celebrity, but she works with celebrities and that’s practically the same thing, no? She’s a designer and is working on the Finnish version of the TV-show Dancing with the Stars, making the outfits. Dancing with the Stars, or Tanssii Tähtien Kanssa, as it is called in Finnish, is shot in Helsinki. Muschu lives in Turku. This means that she’s had to move to Helsinki temporarily and has left her apartment in my very capable hands.

For the past month I’ve been in charge of watering the plants, sorting the mountains of mail she gets and making sure that the apartment doesn’t burn down. And this is where the penises come into the picture. I thought I was doing a good job; I sorted the mail alphabetically, never left any matches out and watered the plants, about a gallon per plant. That should be enough, I figured. And it was. It was plenty. I’m almost starting to think it was too much, because tonight when M and I went to water the plants we found that one of the plants had been invaded by a whole pack of evil white mushroom penises about an inch tall. I have no idea where they came from, I just know that they’re here now. 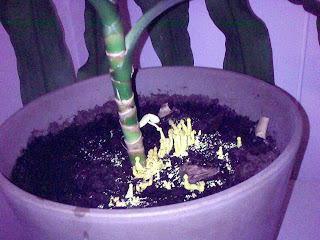 Let this be a cautionary tale; don’t ever make me take care of your things unless you really like little evil white mushroom penises.