Today I’m blogging live from Kristinestad. Wikipedia has this to say about this quaint, little town: “Kristinestad is known for its old town with low wooden houses and narrow alleys. It's also plagued by poor management, resulting in constant cutbacks to schools and other services. The locals are starting to have had enough.” Wikipedia is clearly the place to go for honesty. 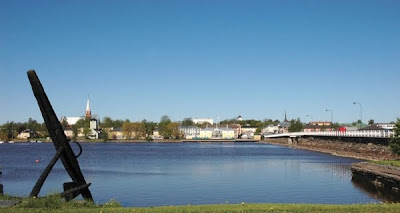 The locals are starting to have had enough.

100 kilometers from the nearest city, life is simple here. A little too simple. M’s parents are sweet and friendly, and are slowly trying to feed me to death. I think it’s a sign of affection. I can hear them reading the paper downstairs. When they’re done, they’ll start over, because that’s what you do around here.

India, also known as Customer Service, is counting its inhabitants. They are going to identify, count, enumerate, photograph, fingerprint and eventually issue an identity card for 1.2 billion people. I’m not sure why they’re bothering with the photograph, though. They could just take a picture of any Indian, use it for everyone and no one would know the difference.

I know what you’re thinking – how could they possibly take the picture and fingerprint of 1.2 billion Indians and be done before the Apocalypse, right? The thing is, they’re not sending out one or two census-takers. This is India we’re talking about. 2.5 million census-takers have been sent out in what can only be described as the world’s largest administrative exercise.

To put things into perspective; Finland, where I live, has a population of 5 million. The United States Army is made up of about 1 million men and women. The census-takers could not only take census; they could take the US Army and then come back for Finland.

What this means, is that not only are there a billion of them, they’re organized as well! Tell me that doesn’t scare you? I always thought Russia was the great threat, but holy hell, if India made up their mind about wanting something… It could get ugly. Imagine, if you will, World War III, but instead of nuclear bombs and burning cities, we’d have millions upon millions of Indians, running around, taking our picture and issuing us an identity number. Come to think of it, so did the Germans back in the 40’s. That one was branded onto the skin, though. Anyway, peace negotiations would just be ridiculous with that Indian accent.

I believe India will be the next superpower, covering three continents and the lower right quadrant of the moon. Just imagine what that would mean. Everything you own would say “Made in India.”