The other day I did something completely un-Zivalike. I told six outrageous lies and one outrageous truth. Usually I never tell the truth so this was a very important day for me. A milestone, even. From now on, I am determined to tell at least one truth every single day. Onward, I am here today to finally put you out of your misery and tell you which ones were lies and which one was the golden truth.

False. My dad and I share enough DNA to feed a small horse. Also, I don’t think he’s ever played poker, and if he has, he certainly has never lost.

False. Sadly, I was not raised by wolves. But mom and dad did a great job with me anyway. Ask me anything about how to kill a hare.

False. I just threw this in here to confuse you. I’m sneaky like that.

False. Chuck Norris doesn’t come to me for any advice at all. But if he did, I would tell him that a knife works way better than a fork, contrary to popular belief.

False. The moose that came to my barbecue party didn’t eat my steaks; it just looked at them for a while and then left again. Talk about bad manners.

True. Well, the extremely intelligent part might have been a bit of a stretch, moderately intelligent would probably be closer to the truth, but the rest of the statement was true. At the ripe age of 11, I participated in a TV game show for kids. The grand prize was a book with 1001 jokes and a gift card to the local electric shop. The lamp that I bought might have been the ugliest thing ever made, but sadly, I can’t find a picture of it. I left it at home when I moved away and when mom and dad remade my bedroom, the lamp mysteriously disappeared.

False. I once tried knitting a pair of gloves and one of the gloves ended up with four fingers while the other one had six fingers. I’m better with goat sacrifice and naked moonlight dancing.

And it seems like we have a winner. Actually two people were smart enough to guess correctly, Mike and Mrsblogalot, but we can only have one winner and Mike was the first one to say it was #6. And because I felt kind of bad about giving him absolutely nothing, I had Zelma make me this fabulous award. It’s a very special award, and Mike will quite possibly be the only person ever to receive it. Therefore, I recommend Mike to take it, hide it and forget all about where you hid it. That is the only way people won’t storm your blog, trying to get one for themselves. 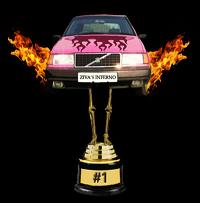