I’ve been away. I know you missed me, and I’m very sorry. I’ve been away because I realized that if I just tried really hard I might actually get something done in school. This was a bit of an epiphany for me. I’ve always thought that studying was mostly about drinking, partying, staying up late and sleeping all day. It turns out I was wrong and studying is not so much about marinating your liver in fine wine, but mostly about the actual studying. As you can probably imagine, I felt a little cheated. Anyway, I made one last big effort for the spring and finished all my courses. As of yesterday the only thing I have left to do for my master’s degree is the actual master’s thesis. With a little luck, I’ll be graduating before I turn 30.

With all my classes over, I’ll have a lot more time for silly stuff like getting addicted to Lost, popping popcorn and most importantly, blogging. However, seeing as I’m a little rusty in the blogging department at the moment, I’ll start out slowly by telling you about how awesome I am. I received another award! I was awarded the Creative Writer Award by both Linda and the very funny and gullible 00dozo. (She honestly thinks I’m an evil penguin.) I have to say, I really like this award. Sure, it comes with a bunch of responsibilities, but I can ignore those and focus on the creative writing, because boy do I like creative writing. 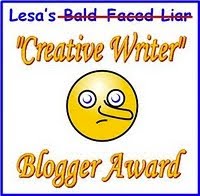 Actual picture of me.
When Linda received this award she said, "In my book, there are two good reasons for lying; one reason is kindness, and the other reason is self preservation. Period."

I wish I were that smart... In my book, lying is not only useful when you want to be kind or when you’re practicing self-preservation, but it’s also very useful when you’re bored and want to have some fun. There’s nothing like seeing those kids running around looking for candy that I didn’t hide.

For this award the recipient has to post either six outrageous lies about themselves and one outrageous truth, or vice-versa. I won’t tell you if I chose to tell six truths and one lie or six lies and one truth, but I have a feeling you’ll soon figure it out for yourselves. Not that I’m not a good liar, I am. I just wanted to make it easy for you. Lying is actually what I do best. My mom is very proud of me. See what I did there? I lied and you didn’t even notice. Like she would be proud of me, ha!

Okay, here goes. The person who can identify the truth/truths wins absolutely nothing. Or maybe a fancy award.

Regarding passing this on and such, if you’re reading this and feel like lying is something you might be interested in doing, I challenge you to accept the award courtesy of me and go lie your heart out. If you feel like you’re not into lying, your mom probably did a better job with you than mine did with me. *