I’ve spent the last couple of days hoping for some extreme weather for this shot, but we’ve had a suspicious lack of weather lately. 70 degrees and cloudy. Every day. Yesterday we were supposed to get some rain and thunder, but it was 70 degrees and overcast, and not even a pretty kind of overcast, just boring overcast.

This picture is from a few weeks ago when the weather gods actually delivered on their promises and gave us rain and thunder. Muschu and I were sitting on the beach, I was taking her picture when the wind suddenly picked up and we heard thunder. In the far distance we could see the rain, and I forgot all about taking Muschu’s picture and instead tried to capture the ominous-looking cloud on film. 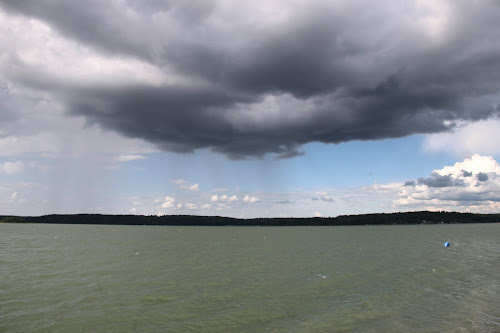