God rested on the seventh day, right? I’m pretty sure he did. I mean, I’ve never actually read the Bible, but I went to church once. So it’s not like I don’t know that Adam and Eve ate a rotten pear from the wrong cherry tree because of the evil pig and suddenly they invented formal wear and decided casual Friday was a thing of the past and then got cast out of paradise, which is silly, because isn’t paradise the place people go after they die? Maybe Adam and Eve just did it all backwards. Anyway, I know all that, and I’m pretty sure God created heaven and earth and light and dark and night and day and energizer bunnies and flat screen TVs and Bulgaria (bad move, by the way) and then he rested on the seventh day. So why then is it that I never get to rest on the seventh day? I know I didn’t create Bulgaria or anything, but I work pretty hard and should be allowed to rest.

M and I had an amazing time on Friday; Zelma’s band was simply awesome. They are going to become rich and famous and forget all about me. We stayed up until 3am, and then got up again at 7 am to go to that wedding. We drove and drove and I swear, someone was building new road as we drove on it, because it never ended. I bet they got to rest on the seventh day too. Eventually we got there and attended a very nice wedding. And I now have a list of things I don’t want when I get married: 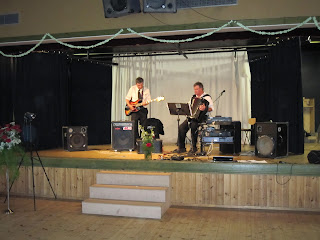 But at least the bride and groom got each other and M and I got to leave. We spent the night at M’s parents’ place and today we had to drive all the way back home. I’m so tired I’m almost happy tomorrow is a work day. How sick is that? *