Being a university student involves many obligations. You have to study hard, sit through hours and hours of lectures, and write long academic and often a little boring essays that no one but a professor is going to read. You also have to memorize insane amounts of information that you are never going to need, and will probably only use to impress some people at a party. And speaking of parties, as a student you are obligated to party. You’re obligated to party long and hard and preferably often.

This weekend was one of those times when partying is obligatory. Friday was valborgsmässoafton, or vappu, or vappen for short, or Walpurgis Night in English. It’s celebrated in Northern Europe and mostly centers around drinking copious amounts of alcoholic beverages and mjöd, or sima, which is a type of homemade mead. We also eat fresh doughnuts and rosettes, and carry around balloons and other fun stuff, but mostly it’s about the drinking. Students gather at a huge hill in the middle of the city, and listen to a men’s choir singing to celebrate the arrival of slightly warmer weather. Then everyone puts on their white caps and go on to get shitfaced. 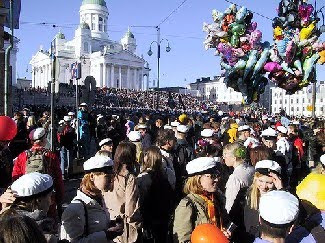 Now imagine all of those people up on a hill, drinking, wondering where the hell they’re going to find a toilet because all that mead is so ready to come out now.
The party continues long into the night. After a couple hours of sleep, everyone meet up on the hill again the next day for a 5.000 people picnic. Some more alcohol is enjoyed, and if you’re feeling brave, some food as well. Many bring little portable barbecues and grill up sausages or steaks, preferably eaten with potato salad, and perhaps some alcohol as well. This year I made cookies for the picnic, just so I could show everyone that I still have cookies. The white cap stays on during the picnic, but has most likely become less white during the night. If you’re an engineer and therefore have the need to feel a little special and show everyone you can do advanced math, your white hat has a black pom-pom hanging from the side. This makes you look ridiculous, and a little bit like Grandma’s curtains, but everyone still looks up to you. M has one of these, and I always have to suppress the urge to dip it into my champagne glass. 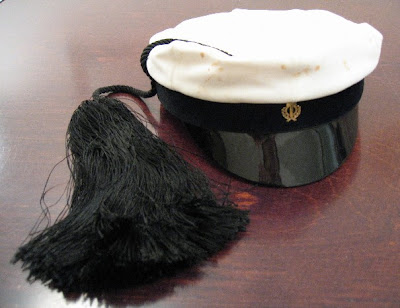 Now imagine the pom-pom soaked in champagne. It would really complete the picture, wouldn’t it?
M and I had a great time celebrating vappen this year, and I am really happy tomorrow is Sunday, because we could definitely use some time to recuperate. Also, I have to finish my schoolwork and read a bunch of UN reports, because on Monday I will have 9 hours of lectures with the UN Special Rapporteur on Human Rights while Countering Terrorism. Now that’s a title if there ever was one. I feel like maybe I should do a little curtsey when he comes in to the lecture hall. *