I’m going to tell you something that might come as a huge shock for most of you. I hope that we can still be friends, and I hope you realize that this doesn’t change who I am. I am the same old Ziva, and just because this dirty secret has come out, it doesn’t mean I’m any less human. Okay, here goes.

I have a past.

And his name is The Ex.

The Ex and I were a couple for five years, and were engaged for two of those years. Roughly. I can’t be bothered to get up and check the engraving in my old engagement ring for the exact date, but it might have been the first and the last year. Or a couple in the middle. The Ex is a great guy, he’s a little like one of those puppies you take home from the animal shelter and then you realize that it’s going to grow and shed hair and pee everywhere and probably eat your favorite pair of leopard heels. Except The Ex didn’t actually pee everywhere. And he didn’t really shed any hair. And he didn’t actually eat my shoes, even though he had the appetite of a much larger dog. But it was a metaphor anyway, so it doesn’t really matter what he ate.

The Ex and I grew apart and separated about two years ago. We’re still friends and occasionally I’ll invite him over for coffee and he’ll try to teach me to drink that vile stuff and tell me that it’s impossible to be a grown up and not drink coffee. Well call me Peter Pan because I ain’t drinking it. Yuck. 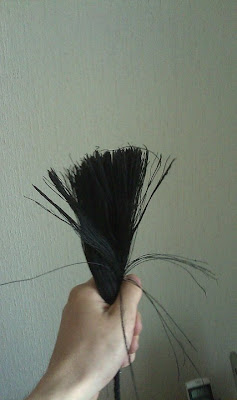 His pom-pom has been thoroughly soaked in some alcoholic beverage or other, just like I wanted to do with M’s pom-pom! The Ex’s pom-pom can actually stand up on its own. Now if that isn’t an academic achievement I don’t know what is. *