Hide Me, That's My Mother!

Every year Zelma and I go on a cruise to Sweden. We travel on one of these boats: 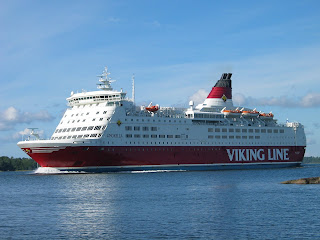 Actually, they might be called ships. Or ferries. I wouldn’t know. I do know that they house a couple thousand people, most of which for some horrible and inexplicable reason are always and inevitably Russian, and that they travel between Finland and Sweden twice a day. The trip to Sweden and back takes 24 hours unless you get off the ship and spend a day shopping in Stockholm. We made that mistake once and almost froze to death. Turns out shopping isn’t great in February. Imagine that.

Mostly we just get on the boat, ride it to Stockholm and back and get off in Finland 24 hours later. I bet you’re now wondering to yourself “but what’s the point in that?” I’ll tell you. Absolutely nothing. On the boat there are a few restaurants, a few bars, karaoke, a tax free shop and many drunken people, most of which, again, are Russian. The boats belong to a company called Viking Line, but, for a very explicable reason, people like to call it Fucking Line. When people get on board, they take a look around, find their cabins, have a couple drinks, shop a little in the tax free shop and after having spent 2 hours doing that, they realize they still have 22 hours to kill before they are let off the boat. They immediately go off in search of someone to have sex with to pass the time. Most of the time they end up with a Russian.

Zelma and I go on the cruises for one reason – to restore our faith in the human race. This has yet to happen. It seems that Zelma and I are magnets for freaks. One time we were stalked by a middle aged man who was there with his old mother. We spent the cruise hiding from him and he spent the cruise hiding from his mother. Another time we spent the night in a cabin with the local troubadour talking about rabbit burgers and limestone. The key to a good rabbit burger is all in the sauce. Or so I’m told.

In a couple hours we’ll once again be off on our quest to restore our faith in humanity. Although, we’ll probably just end up getting really drunk and having existential discussions with a dwarf who’d rather be called a midget. *

Hide Me, That's My Mother!