Puncture Wounds for Everybody - Come Get Your Own!

Today I was stopped by the police, stuck by a needle the size of an iPhone and came thisclose to touching someone else’s poo. As you can probably tell, it was a pretty average day.

Why is that whenever we’re stopped by the police, we automatically assume we’ve done something horribly wrong and we’re going to go to prison for the rest of our lives?

Oh… M just informed me that I’m the only one who thinks that and the rest of you know you haven’t done anything wrong. But that doesn’t change the fact that whenever I get pulled over, or the police wants to check to see if I’ve been drinking (they do this a lot, apparently I can’t drive in a straight line to save my soul from hell), I have a checklist that I mentally run through as I wind down the window.

And that’s what I did this morning when the cops stopped me on my way to work. Vodka bottles hidden from view? Check. Seatbelt? Check. Makeup? Check. Headlights? Check. Dumped the body from the trunk? Check. Keeping a steady 10mph above the speed limit? Check.

Basically, I had all bases covered. All except one. How the hell could I forget “All license plates still attached?” The nice policeman checked to see if I’d been drinking, which I hadn’t since it was only 9am and on Saturdays I don’t start drinking until 11am. And then he casually remarked on the fact that one of my plates was missing. I immediately broke out in a cold sweat and started hyperventilating. I was so going to prison. A big girl named Olga was going to make me her bitch and I’d never get to say goodbye to M. I was so screwed.

I grabbed the steering wheel in a white-knuckled grip, hoping that if they tried to take me away they’d have to take the car with me. Then I stammered something about getting the plate and screwing it on next week. The cop looked at me like I’d just sprouted a pair of antennae on my forehead but told me to have a nice day and let me go.

Olga is going to be pissed when she hears I’m not going to be her bitch after all. I’m a total catch.

I got to work on time and we set about giving 500 people their flu shots. I have a slight fear of needles and therefore spent 6 hours trying not to look at the nurse while she tortured hundreds of innocent souls with needles that looked more like swords than needles. She kept stabbing them over and over and over again. I was there simply to get the patients’ names and birthdays and to record the flu shot in their charts. Why this had to be done that close to the person with the needle in her hand I don’t know, but more than once I gave a frightened little shriek and jumped off my chair when the syringe was a little too close for comfort. 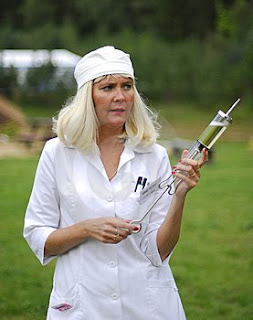 The only pause in the needle torture was when the town drunk, Barry, came in to the hospital and proceeded to shit his pants, literally. He then sat down in the waiting room and grabbed his closest friend Mr. Vodka. After several tries to get Barry outside, he finished Mr. Vodka and pulled out his you-know-what and pissed all over the floor. Then, as every good party, it all ended when the cops came and took Barry away.

My day ended when the nurse finally managed to strap me down and pumped me full of flu vaccine. I was so proud of myself for not passing out, that I’ve spent the rest of the day telling everyone that I got the flu shot so they’d know I’d had a huge needle sticking out of my arm today. Sadly, no one really seemed all that impressed. Except M. But I think he just wants to get laid. M – if you’re reading this, it ain’t happening, I had a huge freaking needle sticking out of my arm today, I’m traumatized. *

Puncture Wounds for Everybody - Come Get Your Own!