Finding Mrs. Liberty in the City that Never Sleeps

Last week I went to the Big Apple in the grand ole U.S. of A. My mom has recently graduated from university and now has a Master’s degree in caring science and my dad has recently turned 50. They decided that we were going to celebrate these two occasions with a family vacation to the States. Now, I haven’t lived at home in 6 years or so, but if mom wants to treat me to a vacation in New York, I’m definitely game.

Turns out I have sort of forgotten why I was so happy to move to my own place 6 years ago. My family is crazy. And when we’re all together we’re even more crazy. We actually lost my little brother twice before we even got to our gate at the airport. And apparently we look a little bit like terrorists cause my sister, you know her as Muschu, was stopped in security and they searched her for all sorts of dangerous things like tweezers and water bottles bigger than 100ml. They also x-rayed my bag twice cause it looked suspicious. I think it might have been the axe I packed, but I also had a pair of tweezers in there so I can’t really be sure.

After Muschu and I had been checked by security, we tried to board the plane, but sadly Muschu was still wearing her terrorist outfit so they took her away to another room for a “random search” and made her take off her shoes and checked them for lethal bottles of water and other things she might use to hijack the plane. Luckily they let her go after a while and we could all board the plane and be bored to tears for almost 9 hours while practically sitting in the laps of strange people and eating yucky food.

Eventually we made it to New York and made an attempt at crossing the border into the States. They asked all the required security questions but when they heard I’d been in the States once before, the warning bells started ringing. They made the rest of my family go ahead and took me with them to another room because there were some “problems with my fingerprints.” I’m pretty sure they’ve just never seen a person who actually came back to America after already visiting it once. They probably just wanted to make sure I wasn’t crazy or anything. Luckily they let me go pretty soon and we were able to keep going. We went outside and expected to see the SUV we had ordered to take us to the hotel, but instead saw this: 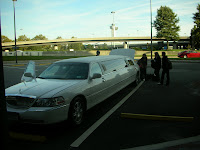 Yep, that’s a limo. This thing had the turn radius of a handegg field. While we rode that sleek white beast to the hotel, Japanese tourists on the street kept taking pictures of it. It was awesome.

And then we realized we were in New York. Holy crap.

I loved it. And I soon realized Manhattan is the easiest place ever to navigate. Every street is numbered so you can’t get lost even if you tried. The first day we went ice skating at Rockefeller Center. The second day we hopped on and hopped off the hop on and hop off buses and went to the largest department store in the world: Macy’s in New York. If you want to get lost in New York, just go inside Macy’s. I swear, entire floors of clothes or shoes disappear when you turn your back to them and when you try to find them again they’re full of men’s socks or Martha Stewart tablecloths. Macy’s New York is like Rose Red – alive and growing on its own.

I actually spent a fair amount of time searching for the Statue of Liberty. I found her at Toys“R”Us, next to the Ferris Wheel, but she looked a little blocky… 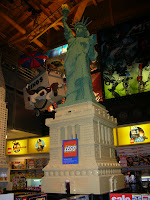 Then I found her at a store, but she looked a little furry: 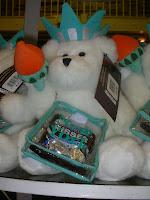 Then I thought for sure I found her at another store, but she looked a little yellow… 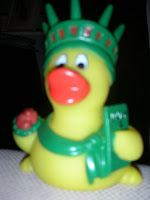 Then I found her at yet another store and this time she was both yellow AND furry. 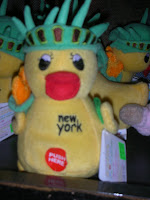 And at the M&M store I found a whole flock of Statues of Liberty! 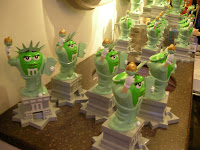 But then someone finally told me she was actually in the water and lo and behold, there she was. 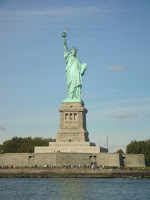 We also saw the UN HQ and the Empire State Building, Madison Square Garden, Times Square, Ground Zero, Central Park, MoMA, the NY Public Library and went to a musical on Broadway. We saw the Phantom of the Opera and I have to say it was truly amazing and worth every penny.

I realized something while on vacation. Everything is big in New York. The buildings… 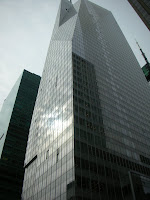 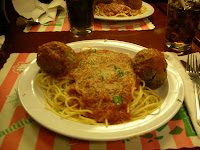 Even the pigeons are HUGE. This one was actually bigger than the Chrysler Building: 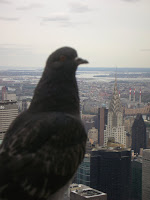 The police cars were tiny, though… 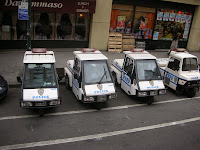 New York is a very busy city. Everyone is running all over the place, cars everywhere, and the thing I really hated: everyone yells at you while you’re in line and trying to order fast food or coffee or whatever. They keep shouting “Next! Next! Next!” And if you’re not fast enough running up to the counter they give you a dirty look and make you feel like crap. And then they keep interrupting you while you order with “Anything else?!?” And make you feel like crap for actually ordering more than one cup of coffee. After the first time we ordered something at Starbucks my entire family was in shock and I think we all felt like crying a little. Thankfully, we made a full recovery and toughened up for the rest of our stay.

At the end of the week my awesome friends from North Carolina came to see me and we did the tourist thing together. I love them dearly and they are going through a difficult time right now, so it was really great to see them. We had a wonderful time – thanks guys for coming out to see me, I’m thinking about you!

All in all, New York was awesome. Sure, I barely heard any English, and I was afraid to make sudden moves around most of the people there and the street signs were just as frequently in Spanish or in Chinese as in English, but it was still wonderful. Pretty damn cold, but wonderful. And big. And no one was stopped in security on the way back home. Apparently Americans are not nearly as nitpicky about who’s allowed to leave the country as they are about who they’re letting in. Imagine that.

And now I have a Dwight Schrute bobble head doll and a magic 8 ball to tell me the answers to life’s all questions.

So, magic 8 ball, will I ever go back to New York?

“Better Not Tell You Now” 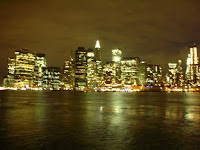 Finding Mrs. Liberty in the City that Never Sleeps