Volkswagen Vento or Snowball - You Decide

Today is our independence day. The year was 1917 when Finland, tired of always belonging to other countries, declared its independence from the Russian empire, defeated the Death Star and showed the world who’s their daddy. I’m celebrating by watching The Unknown Soldier, a 7-hour black and white movie about the war. It’s shown every year and it only gets longer. Every Finn is supposed to have seen it, but I don’t know - I think many of us simply fall asleep when we try to watch the whole thing. And after The Unknown Soldier is over, I’ll watch the Presidential Ball, to which I wasn’t invited this year either. One day I’ll be there, dancing with the stars. Or in prison, no one knows.

In other news, I lent my car to Muschu. This is what happened. 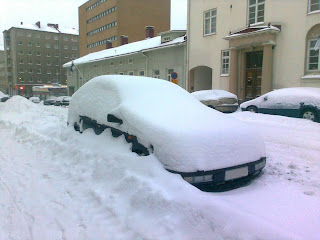 She only had it one day! How is this even possible? We didn’t get that much snow that night. We won’t get it out of there without a shovel, and I don’t own a shovel. Our plan B is to wait for spring. It shouldn’t be too many years. *

Volkswagen Vento or Snowball - You Decide